When most of us think of going out to groove to some music with a few friends and a few more drinks at Hauz Khas Village, the image of a crowded, sweaty, stampede oriented and alcohol fuelled riot playing the Top 30’s comes to mind. I’m happy to say that most definitely was NOT the case last Sunday.

A New Delhi based music collective REProduce Artists  brought the Listening Room to a creative space called Bedlam in the far end of the village past all those late night food stalls. Bedlam is a pocket of originality in the continuous drone of repeats and annoying people shouting offers at you on the street that has become Hauz Khas Village. It serves as a home to A Little Anarky Films  which is a collection of creative and innovative individuals who make great video content for all those out there looking to step out of the box and into a cool refreshing pool! 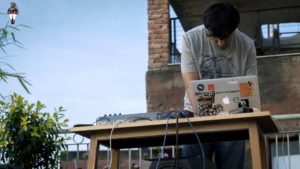 The Listening Room is an absolutely unique experience, and this being the 30th session definitely did not disappoint. The man with the plan is Rana Ghose, who said he just legitimately wanted to see shows he was excited about so he started up the Listening Room sessions. When asked what he hopes to achieve Rana explains,

“ I like all kinds of music and was missing certain things but I knew there were people making amazing music that didn’t compromise on anything, it was just that they just couldn’t get gigs in the commercial circuit.  That’s it really.  It just so happens that people seem drawn to it, for whatever reason.  Of course that’s amazing, but yeah, it’s not like building a community was a goal per se.  Or maybe it was a latent one but I basically had no idea what was going to happen and wasn’t banking on it.  I don’t know, let’s just see what happens, I love people and all that shit but who knows man.” 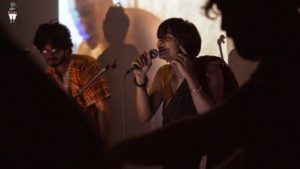 We asked Rana what made this LR unique, he says,

“It’s the first time we did in at Bedlam as an LR session. I was excited to produce an LR there because the multiple spaces that got me thinking, and also I always wanted to produce a staircase.  So yeah, it was different that way.  Also music on a roof over sunset is always a good idea.” 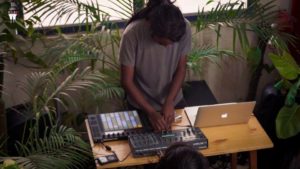 Their focus is purely on the live music being cultivated and shared in India that wouldn’t adapt well in the more mainstream oriented venues. Giving off a no-holds-bar vibe, you never really know what to expect when an artist takes the stage. This time around they were showcasing a few debuts of Delhi based artists with a few more from Jaipur, Bangalore and Patiala.

Check out this video of Rogue Atari, an artist who simultaneously paints while he is performing.

An AV performance by Corridors, AKA Rijul Victor-

Some of these artists have been performing for many years while some are doing their debuts. Wondering where you find such unique musicians? Rana and his buddy Bhanuj Kappal are constantly sifting through Bandcamp and Soundcloud, looking for unique music to showcase. We asked Rana why he chose Bedlam as a venue, he said,

“Because Uvika, Koval, Reshma, and the rest of their colleagues get it and are down, and because the space is amazing.  I figure if you have people who are excited about putting in on, and the space can work, you can’t go that wrong really.”

If you haven’t heard of Bedlam- they facilitate workshops, seminars, mixers, screenings, showcases, collaborative shows etc. So whether you’re a writer, producer, director, illustrator, graphics artist, musician, cinematographer, or just anyone with an idea that they want to breathe life into, you can find people to collaborate and engage with at Bedlam. The goal is to unite, to let your ideas run loose, create. 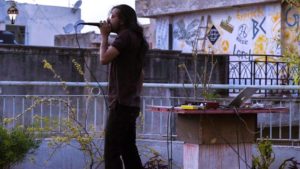 A Little Anarky is an integrated content house founded with a vision to create a disruptive mode of storytelling. We are a team of over 25 young filmmakers, writers, designers, strategists, animators, marketers and social media experts who work together to create the best possible visual content, and we have a great time doing that.

A collaboration like this was just the cool drink of water the city needed, or beer in this case (it’s BYOB btw!). We’re looking forward to the next session, music lovers of all sorts should be too! Their next event is on the 2nd of April in Sainik Farm, you can visit the page here and keep up with their activities on their public group.

If you are looking to find more events that we’ve covered check these out.