Who doesn’t love themselves some hardware? And wouldn’t it be absolutely excellent if you knew it was coming from none other than our very own Mother India? If you haven’t heard of them already, it’s time you check out Animal Factory Amplification, bizarre and beautiful sonic beasts from Bombay, India. They design and build unique affects and amplifiers for musical instruments. An image of a uni-color box with a few knobs might’ve popped into your mind right now, but what make Animal Factory Amps so special are the insane designs and finishing each one of their products has. I mean just take a look at these bad boys! 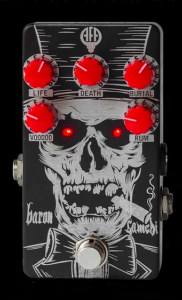 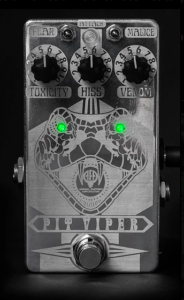 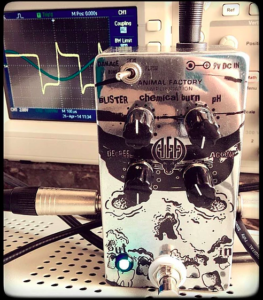 The founder of AFA, Aditya Nandwana, has made sure that if you rock one of these babies, people WILL notice. Whether it’s the badass designs or the unique sound, no musician (or even non-musicians) can ignore them.

Aditya has his own solo project called Sawhorse, which was intended to be darkwave/industrial/experimental electronic. He started playing behest of Rana Ghose and Bhanuj Kappal (Reporduce Artists) who had him perform his first gig at St. Judes Bakery in April 2016, followed by gigs at Antisocial Bombay and the Humming Tree. His love for hardware resonates even here as he involves a lot of it in his performances (he’s trying to keep his computer out of it).

We asked him what he hopes to bring to his customers when they purchase an Animal Factory Amp? Here’s what he had to say.

“Well, joy for one. It has to be fun; if it’s not fun, if you’re not enjoying the process, the product is meaningless. I hate music hardware that takes itself too seriously. It’s music, not fucking lab equipment.

Apart from that, I’d like to see people explore sound and music using my products. Push themselves out of their comfort zones, change their playing styles, find a new way to use an old idea or product. The biggest compliment for me is “I came up with this (riff, hook, tune) playing your pedal, I don’t usually play like this.” If somebody can find a new musical approach through the sound of one of my products, it feels extremely fulfilling. “

We definitely agree with him, music should be fun, it should be liberating. If it can’t be that, then really what is the point? The flavor it adds to our lives and somehow creates an order in all the disorder of the world, the universal language must be pursued with a passion, and Aditya sure has the fire within!

Now, we’re all sure that getting a beautiful product such as this together requires teamwork, so we asked Aditya what it really took to have this project up and running. He was very grateful for his family and friends who were there for him even when he was ready to throw in the towel (there have been a few rough patches here and there). Other than the never ending support from his loved ones, Ritesh and Nirali at Designaren for their help in the design and creative work; Vaibhav from Hatch (Bangalore)- a brilliant mind, product genius and eternal optimist; Anuj Gupta, the monolith around which the Indian rock scene is built; David Torn for the shot in the arm in the beginning; the wonderful Douglas McCarthy for his not-so-small role in taking Animal Factory in a new direction. And last but not least he’d like to share the love with all his customers who trust and endorse AFA products.

“If a synth misbehaves, I feel you must let it be – it is probably trying to communicate something to you.” we let the #animalfactoryamps modular prototype be and it created this little ditty for us. #modular #modularsynth #electronicmusic #electronicbeats #musicproduction #sounddesign #bass #bassmusic #dub #dubstep #synthesiser #synthpatchers #analog #analogsynth #techno #electro #soundscape #makeinindia #madeinindia #muffwiggler #animalfactoryamps

A post shared by Animal Factory Amplification (@animalfactoryamps) on Jan 26, 2017 at 10:43am PST

This is the stuff of dreams for musicians, and the best part, it is all MADE IN India. Making AFA at the forefront of musical hardware in the country, hopefully soon the world! Aditya is definitely going against the tide when it comes to quality control. He starts at the source – high quality electromechanical components, low-noise parts and professionally fabricated circuit boards. He also has his hands on the industrial design work, ensuring the final products are assembled/soldered, constructed, and testing himself. Unlike most other Indian products, the jugaad has no role to play in AFA products.

His vision for 5 years down the line is for Animal Factory Amplifications to be more than just a pedal and synth company, but to build a community and ecosystem around music technologies in India, to change the way people approach sound, to step out of the box and into an ocean of musical experimentations.

As you might have noticed, other than a unique sound, the designs on these pieces are epic. Aditya works very closely with the illustrators to get the final product. Tyler Bohm from Columbus, Ohio was the gifted artist behind Claustrophobia, one of his favourite pieces, and Ade Ramnai who did a fantastic job with Pit Viper. Some Indian illustrators he’d like to work with are Denver Fernandes and Aaquib Wani although he’d have to come up with new products to get that show on the road. 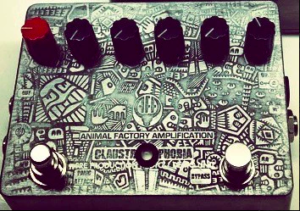 Now these instruments aren’t exactly the cheapest so we asked him what makes analogs so special, and whether it’s worth the investment? Here’s what he had to say!

“The unpredictability. When you work with an analog system, you’re working with the real world, the physical and tangible world. The manner in which an analog system reacts is really hard to pin down. In digital signal processing, there is always a finite number of outputs to a practically infinite set of inputs. With analog, there are nuances that are very hard to emulate in a digital system.

Apart from that, while digital emulation and synthesis is improving, I don’t think it’s quite there yet. There are some pretty good Moog emulators out there, but if you play a real Moog, you’ll hear – and feel – the difference immediately.

All that being said – I’m definitely not a Luddite. There are certain clear advantages to digital technology in the audio space. DSP has the power to go above and beyond into realms that analog reasonably can’t or creates practical difficulty (e.g. reverb). Look at Mutable Instruments and their incredible line of synth modules – they’re not emulating vintage bullshit, they’re creating incredible new instruments that harness the full power of the digital processors they use.

I think it’s important as a designer and a builder to keep abreast of technological advances – there are far too many people out there who are too married to their ideas about both digital and analog technology; I’ve had some people telling me “chips” (analog ICs) are digital, others would reject an all-tube amp because it has digital switching control. Let’s not even get into the idiotic discussion about “mojo” components. Technology is malleable, and it’s high time that people got over it. At the end of the day, it’s about what sounds your gear can make, and what you can make with it. The rest is all noise.”

We’re definitely super excited to see what new musical magic they have in store for everyone in the future, so stay tuned!