Finally its here! The missing piece of the puzzle. The DJS-1000 is a new sampler launched by Pioneer that is going to revolutionize DJ sets all over the world. This is the next big revolution which will now bring the studio to the stage. No Lap Top required on stage and just 1 small USB will do the trick. Every DJ now has an opportunity to think and perform like a producer on stage and tap into another dimension of their creativity that is not necessarily expressed while dj’ing. Even though Abelton has been there to enable people to perform their own music live, the DJS-1000 if becomes a standardized piece of equipment in clubs, will just make it much easier for people to perform. They will just bring their USB and load their samples. In Addition, every one knows that when you touch hardware and there is no middle man like a lap top coming in between, the feeling of connectivity to the music and the crowd is much more so in this case the sampler literally becomes the instrument. Super Exciting times ahead. Now you can even organize your own productions and sample your own tracks mixed in with other grooves from other producers to always keep the vibes fresh!!! Amazing!!! 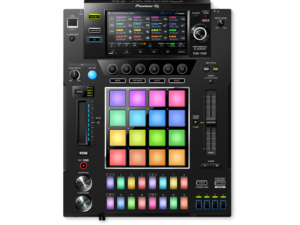 Add the DJS-1000 to your DJ set-up to intuitively create unique sounds and phrases in advance of your set, or on the fly. Use the DJ-friendly interface to sequence and loop your samples as you wish.

With a 7-inch full-colour touch screen, 16 multicoloured step input keys, multicoloured Performance Pads, a host of inputs and outputs, Live Sampling and various other performance features, having the DJS-1000 in the booth will propel your sets to the next level.

STEP SEQUENCER
Easily create a new groove by tapping the 16 large, multicolored step input keys. Thanks to the keys’ changing colours, you can keep an eye on sequence information on each track, at all times.

TACTILE PERFORMANCE PADS
Load up to 16 samples to the large rubber pads, then finger drum freely to layer sounds on-the-fly. The multicolour LEDs show what samples are in play, while Velocity Mode lets you control the sample volume with the amount of pressure you apply.

TOUCH STRIP
Simply touch the strip to change the pitch while using the Pitch Bend feature, or play a drum roll by hitting the Note Repeat option. Customise parameters for even more creative possibilities.

7-INCH TOUCH SCREEN
Tap the LCD display to instantly access one of three screens. The Home screen for an overview of assigned samples, the Sequence screen to view the currently playing sequence pattern and the Mixer screen to adjust each track’s volume.

ACCURATE SYNCING
Sync up your DJS-1000 to a CDJ or XDJ set-up using Pro DJ Link. Thanks to the Beat Sync function, a tempo slider and a Nudge button, you’ll adjust tempo and beat position manually, just like you would on a turntable.

LIVE SAMPLING
Sample input sounds and instantly use them as individual tracks. Your sampled sounds are automatically synchronised with the current sequence. Play them in a loop and drop them straight into a live remix.