Came across this label via shazam.  It turned out to be a track by Kiwi releases on ‘Disco Halal“. The track was totally my style, ethnic and funky dance floor vibe. As soon as I saw the name of the label, I got intrigued and it made me take a look at the catalog. Found many tracks that I liked. Also saw Red Axes in there which was a huge sign of credibility. Top Label with some great tracks. Ethnic, acid vibes with a smooth and tough edge. Totally recommend this label for those of you that have not heard it. Very pleased to add some gems to my collection via “Disco Halal”

My Favorite tracks from the label

Based in Berlin, but firmly rooted in the diverse and forward-facing musical scene of Tel Aviv, Disco Halal hails from beneath the minarets of the Holy Land. Founded and led by Moscoman, the label exists to present a tightly-knit and growing community of musicians and producers, each transmitting their unique musical identity, yet each united by a unique sensibility, as well as a harmonious balance of rhythm and experimentation. 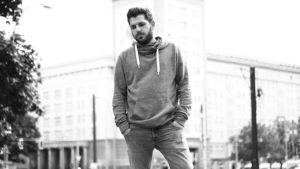 Initially establishing the sound of Disco Halal with a series of diverse but like-minded edits from artists such as Acid Arab and Mehmet Aslan, before long, Disco Halal had moved onto more ambitious endeavours, such as Autarkic’s mini-LP, ‘Can You Pass The Knife’? Encompassing elements of downtempo, new-wave and alternative pop, stitched together with a leftfield dancefloor throb, it firmly established Disco Halal’s esoteric tastes, as well as the unique take on electronic music suddenly, rapidly emerging from the once-overlooked nightlife and club scene of Tel Aviv.

In the few years since, the seeds of Disco Halal have borne undeniable musical fruit. Alongside Moscoman himself, Krikor and Red Axes have collaborated on the weird, wonderful ‘Subaru Pesha’ EP, drawing plaudits and an irresistible remix from the masterful Roman Flugel. Open-minded parties and record stores worldwide continue to have their ears and hearts opened to records from Chaim and Simple Symmetry; definable only as the sort of releases that have DJs and dancers alike clamoring to the booth, in search of a sometimes elusive Track ID…

Recent transmissions from Yoshinori Hayashi expand the label’s vision in terms of tempo, genre and culture, creating waves as the Disco Halal sound reaches Japan, while Moscoman himself has recently delivered arguably his most personal and expansive single, ‘I Ran’, backed by a glorious remix courtesy of the label’s own Simple Symmetry.

With truth at its center, the sound of Disco Halal is an open-ended prospect; a shared vision

Mehmet Aslan is doing a 3 City India tour with The Shelter this weekend.