Wind Horse Records is proud to present another spell binding compilation from the ‘Banjara’ series composed and unleashed by master chief Hamza. In his own way of coming full circle, the sensei of culturally inspired electronic dance music returns to his roots, with “Banjara India”.
This 10-track offering encompasses the Indian influences Hamza has encountered throughout his career and has helped shape him as a musician, while at the same time giving DJs some serious firepower for the dancefloor. 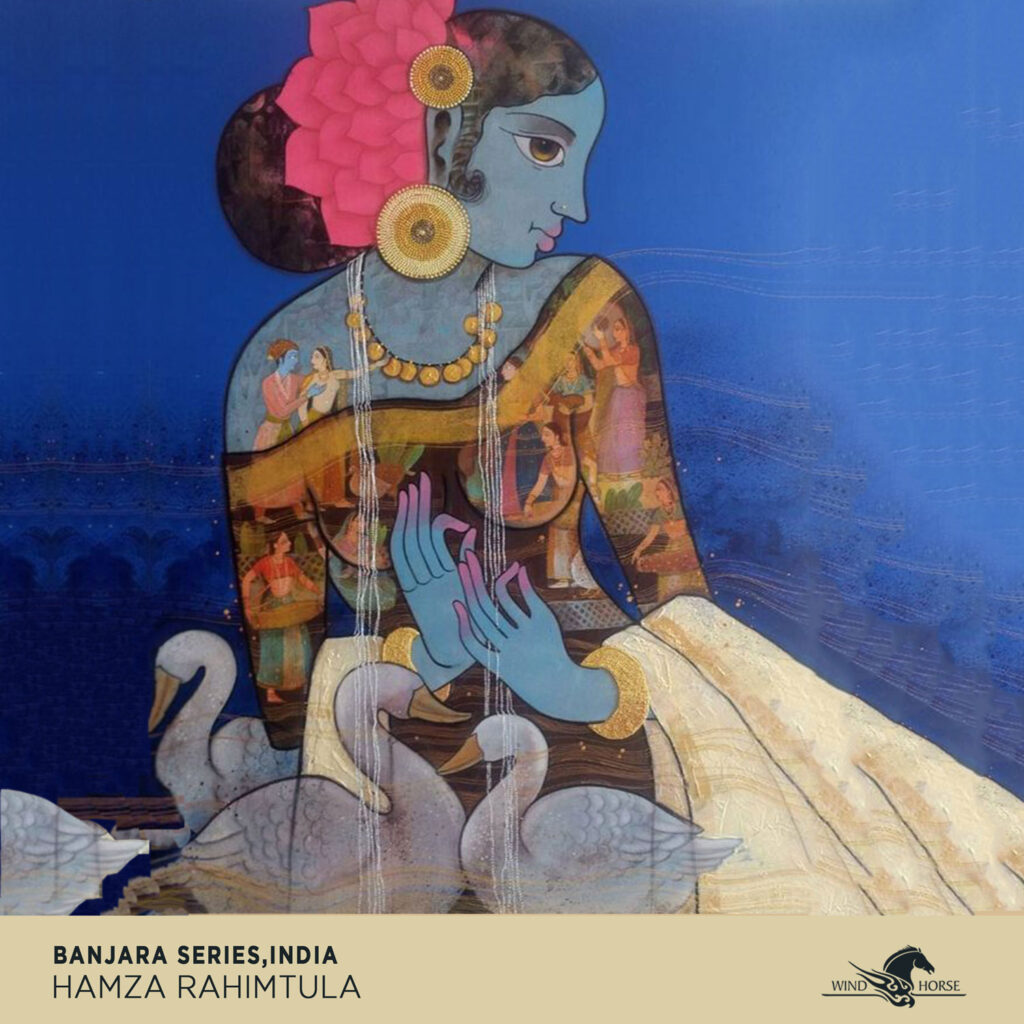 Kicking things off we have ‘Morchang’, an organic dance-music track that begins with an addictive beat and combines beautifully with a deadly bassline. Together with the distinctive rhythm of the Tabla & classical Indian vocals this track almost immediately captivates you with an indigenous groove that you can’t get enough of. The breakdown is interspersed with a mind-blowing table solo along with a mysterious Tibetian Long-horn like sound that is definitely going to give listeners goosebumps.

‘Samadhi’ , the 2nd track on the compilation, is intense by design and driving by nature. Simplicity of rhythm meets enigmatic notes from Indian classical instruments, beautifully melded together to immerse the listener in a state of ecstasy. The track is minimal in-form and once again uses vocals with aplomb to elevate the track to another level. Beautifully crafted transitions blend the different components of the track together with consummate ease, making this track suitable for casual listening as well as dance floor carnage.

The next track on the compilation is called “Jungly”,  with due reason. Hamza’s unique sound design abilities give this track a stripped down yet groovy persona that’s interspersed with quirky stabs and efficient percussions. As the track picks up so does the finesse , with the addition of a snare drum that infuses more movement along with fleeting sounds from a wind instrument that take this track up to another level all together.

‘Samsara’ follows up next, with an organic vibe that hooks you in from the get go. The track has an elusive nature to it as it slowly opens up. Innately simple in form, the kick-drum is accompanied ably by crisp hi hats & snares that lend it an earthy groove. A melancholic pad adds more character to the track, taking it into deeper realms and carrying the listener along with it. The breakdown of the track is nothing but spectacular as it drums up suspense and expectation leading up to a subtle yet powerful drop.

Mid-way through the compilation, ‘Barmer Calling’ has a lucid groove and movement which isn’t surprising considering the producer’s prowess. Building up from a fantastically composed rhythm, the track has a feeling of anticipation to it as a tight bassline drives it forward. Fleeting synth stabs give way to intelligently curated pads that make their presence felt. Staying true to the ethnicity of India, traditional sounds of the flute blend supremely with the rest of the track, as it transforms itself with utmost ease. Be sure to find this one being played out at a dance floor near you.

The second half of the compilation begins with ‘C Thar’ , as Hamza’s rhythmic pedigree once more comes to the fore. As the tune builds, percussions and atmospheric effects add a magnetic personality to the track, giving way to a playful bassline that adds a lot of fun to the track. Keeping it tight and minimal, ‘C Thar’ combines the musical persona of varied instruments with the underlying groove to deliver a exotic vibe like no other. Perfect for a beach, house or after party, this one is sure to keep you moving.

Exploring the Northern regions of India, ‘Dharamshala’ lines itself up next with an incredibly crisp beat that you can’t ignore. Absorbing the nuances of the region effortlessly, this track builds up a crescendo that’s primarily led by its foundational rhythm. As it opens up, the tune combines vocal samples along with majestic samples from Indian instruments that give it charm and grace. Consistent in its sound palette, you might find this one being a staple in the sets of many artists in the near future.

‘Karnatik’ comes in next, with an edit that spews flow and bounce. Fundamentally non-fussy in its approach, this composition comes to life with an impeccable flute solo that carries the imagination of the listener into uncharted regions of India with ease. Tribal, yet contemporary, the track fuses different organic elements with maximum effect. Vocals once more add impeccable persona to the track, helping it add layers of movement that pretty much ensure it keeps your feet tapping with every beat.

The penultimate track on the compilation, ‘Sufi Moon’ is busy and energetic right from the off. Tablas along with a hit-hats and rim shots add a lot of texture & vibe to the track along with a subtle yet powerful bassline. Beautiful, bubby acapellas that are indigenous add magic when combined with versatile classical instruments. An exceptionally constructed pad, adds those ethereal feels to the tune, leading up to a psychedelic section along with a breakbeat pattern that builds up flair leading up to the drop. This one will most certainly breathe fire on most dance floors across the world.

Rounding things off for this series is the track called ‘Tribal Sensitivity’ which is quite simply, groove laden. Purely driven by Hamza’s skilled rhythmic construction, that track once again has a stripped down approach that yields awesome results. Frenetically energetic, the track powers through with impressive percussive arrangements. The second-half of the track springs to life with a  beautiful, lush lead that lends a bit of Detroit house inspired panache. A great way to conclude yet another powerful release from one of India’s most talented musicians.

Get your copy in here –
Beatport