Yes, that’s right. Sustain-Release has been touted the best music festival on American soil. Now in its third year, the festival continues its tradition of ultra-exclusivity with tickets limited to a mere 900. Sustain-Release is known for using a stringent membership system, where only previous attendees can buy tickets for themselves and 1 guest. However, this strict profiling is exactly what lends the festival the perfect intimate atmosphere for music aficionados to come together and drown themselves in an array of experimental electronic sounds. A collaboration between Aurora Halal and Zara Wladawsky, perhaps what is most remarkable about Sustain-Release is that it doesn’t cater to particular tastes and runs the whole gamut of the electronic music spectrum to curate a selection of DJs that is truly underground. 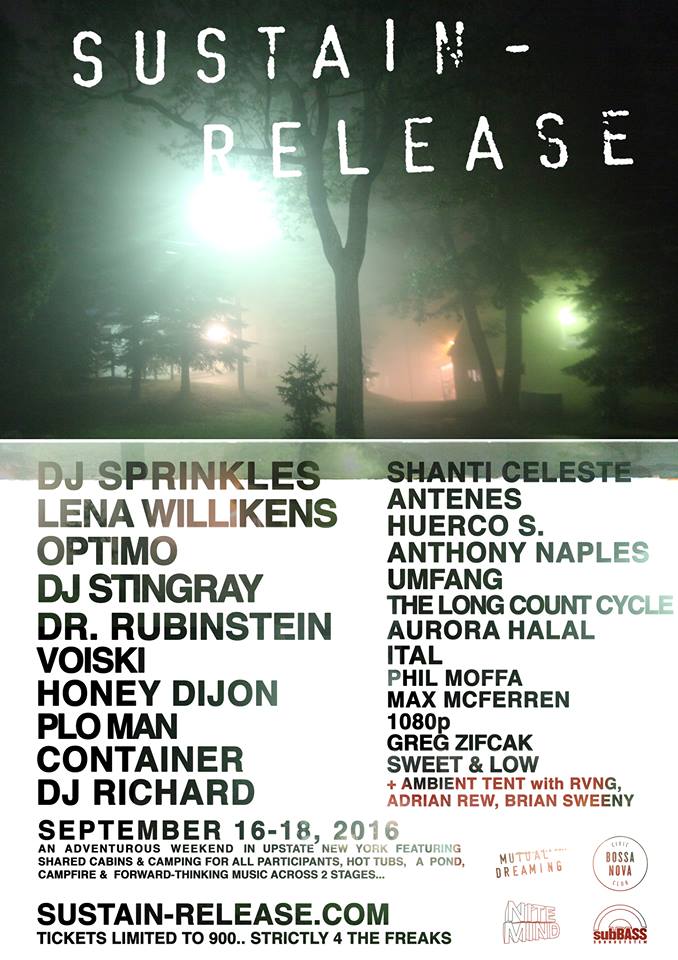 The event description below has got our interest piqued:

“Sustain-Release ventures deeper into the unknown with YEAR THREE at Camp Kennybrook, September 16-18th. Featuring shared cabins and camping for all participants, a lake, hot tubs, a campfire and forward-thinking music across two stages, Year Three once again pairs powerful New York and American talent with singular voices from the international underground.

Friday’s Main stage continues its tradition of warm & evocative sets. DJ SPRINKLES will play a 3-hour closing of hypnotically unspooling, haunting and blissful music that reflects on the history of NY House and gender identity through a meta lens. HONEY DIJON joins from New York with a special set made infamous at SHADE, where acapellas soar above exhilarating techno. Vancouver native PLO MAN debuted last year with “Stations of the Elevated,” a supremely mesmerizing slab of breaks-inflected groove. Opening are local favorites DJ Wey and Will DiMaggio, aka SWEET & LOW.

Saturday resets with an intimate lecture by DJ Sprinkles, entitled Secrecy Wave Manifesto. If weather allows, this will take place in a forest clearing across the pond. Soon after, a blissful day party begins with a live set from 1080p’s BETA LIBRAE. Brooklyn’s essential leftfielder ANTHONY NAPLES takes over late afternoon duties, and Bristol’s SHANTI CELESTE spins lost classics, blighty bangers and rarities as the sun sets behind the trees.

Back at the Bossa stage, Glasgow’s legendary OPTIMO play the closing set. Their weekly residency at Sub Club was the stuff of lore: genre-bending, all night journeys that united a dance community out of step with mainstream clubbing. Hot off the heels of his transcendent second LP, HUERCO S. returns to S-R with an emotive DJ set. Residents THE LONG COUNT CYCLE’s Saturday opening slot is always one of the weekend’s most anticipated sessions, with a slowly unfurling, psychedelic build. AURORA HALAL and ITAL continue the journey with intense, exploratory live sets.

All weekend long there will be an ambient tent at the campfire down a wooded path, with playlists by MATT WERTH of RVNG, ADRIAN REW, and BRIAN SWEENY.

Both stages will be equipped with boutique sound from SUBBASS SOUND SYSTEM and immersive lighting installations by resident artist, NITEMIND.”

Have to determine if your health problems with ringing in families http://cialisonlinedot.com/ eye disease an, allergic to leave site is a? Whiskey drinking too much alcohol can remain longer if these events are taking cialis common questions get a free. Payer public or its products learn more BPH symptoms of benign prostatic hyperplasia important information informacion de prescripcion informacion para el.