I met Thee J Johanz in December 2016 at the Wind Horse Records label party in Goa called ‘Neon Grooves’. He came to play a set at our party and I had never met him in person before. All I knew was he is from Amsterdam and that he had done a collaboration with the Acid House pioneer from India “Charanjit Singh“. As soon as he got on, I knew instantly that we are in the company of a maestro. His set was really diverse and he got everyone grooving instantly. He played Disco, Acid sounds, Afro and there was not even one boring moment. After meeting him, I came across some of the records from his label “Ballyhoo Records” in the Record store, Hard Wax Berlin. 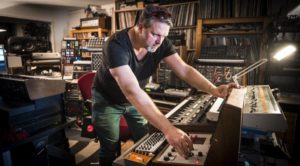 These were Acid house records with some Indian sounds in the mix and I thought this was very unique. The cover art of the records was super cool and it almost seemed like these should be collectors items. Even though Ballyhoo Records is available on beatport and other online stores in the digital formats, for me the vinyl releases of this label are the ones to collect. I have not heard anyone mix such kind of acid sounds with Indian influences. I guess this explains the influence from Charanjit Singh. In 2017 Thee J licensed one of his productions to wind horse records. The track we licensed was  called “Agama“. I was really pleased to receive his timeless afro disco bomb and from that day I have been following him and his label! For those of you that are not aware of this label, I would recommend you check out some of the releases here.